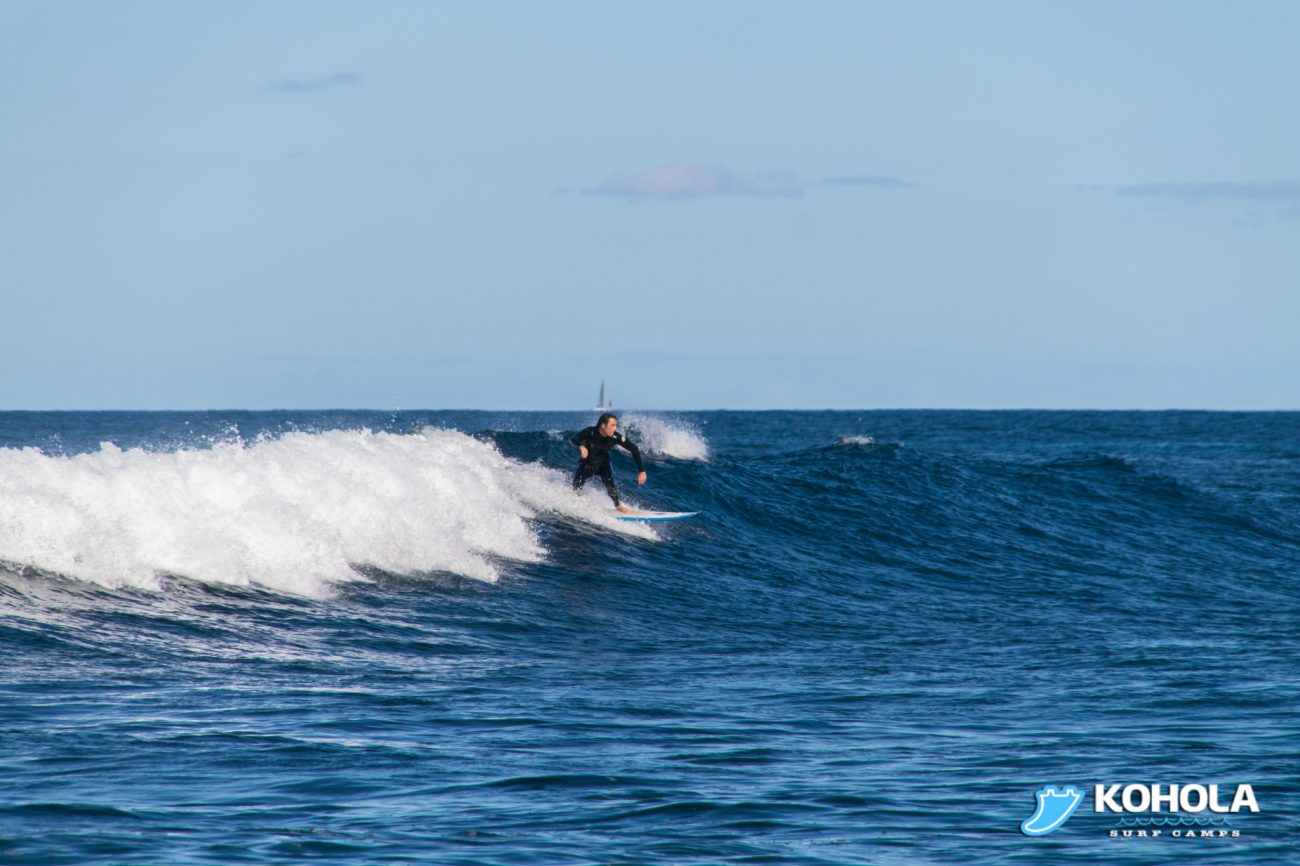 Continuing from the last post: it is time for a coffee, usually enjoyed on a terrace near the pool and some palm trees. A scene so lovely you wouldn’t want to leave. It is coldish at first, but after a few minutes of direct sun rays it becomes warm, maybe even hot. We talk and make plans for the day which is influenced by weather and surf forecasts. There are always some things that are needed to be done, and they will be done, but they are planned according to a surf session. After all, it’s not surprising to have surfing as the center point of a surf camp. Weather forecast doesn’t mean much since it is almost always sunny here on Fuerteventura, and it doesn’t affect surf condition. Actually, if it’s cloudy, it happens to be less crowded at the near surf spot called Rocky Point.

The important part is surf forecast. It shows size, period and direction of a swell, wind speed and direction, and tide charts. Swell size determines the height of the wave (usually the more the better, but it could be too much), swell period determines the “fatness” of the wave (it should be corresponding with the swell size), but swell size and period together determine energy (or total power) of the wave. The direction of the swell determines if the swell will reach the surf spot at all, and how the waves will brake. The wind would ideally be non-existing, because more wind equals more interference with the waves and worse surf conditions in general. A big influence is also due to tides, which depends largely from spot to spot. On some spots it is dangerous to surf during low tide as it is very shallow and rocks start to stick out of the water, and on some spots waves don’t break during high tide as it’s too deep. There are even more parameters to look for and they are even more correlated, but it would be too much of surf forecast for a cooking blog.

So after carefully checking and assessing all that information and calculation, I take into consideration, that forecast might be wrong and take a walk to Rocky Point to make sure I see the surf conditions with my own eyes. If it’s surfable, I decide to go to surf when the tide is highest during my free time period (between breakfast and dinner). And it’s on! I put my wetsuit on, grab the board, and walk barefoot to Rocky point to have some fun.

After surfing, it’s time for lunch, rest, chill, study, or whatever else. And after all that, I put on an apron and start with cooking. But what do I cook? Well, I cook something I planned few days before. That is one of the most common questions I get from the guests: how do you choose what’s for dinner? The answer is somewhat complex as I invest some serious brainpower to come up with a menu that is tasty, fulfilling, nutritious, interesting, familiar, non-repetitive, and affordable. Explanation for the tasty part is trivial because why cook anything if it’s not tasty. It needs to be fulfilling and nutritious to fill up empty stomachs and make up for all those calories burned during surfing (and that is a lot). It needs to be interesting so the guests want to eat the dinner in the house and not in a restaurant, but also familiar to guests’ palate as some “novelty foods” might put people off the dinner. Non-repetitiveness goes in context of day-to-day planning, i.e. not using the same ingredients from the day before, and affordable is here because every dinner is 6€, and using ingredients that cost more would make no sense.

I have 20, maybe 25 dishes that I’m doing over and over again because for those dishes I know exactly how much ingredients and how much time I need, which pots and pans to use, and the overall procedure to the finest detail. But occasionally I make something new. I use week as a unit of a whole because that’s how long most of the guests are staying. One thing to consider is that Croats love meat, and for some a meal without meat is useless. So that’s why the meat is mostly on the menu, but I make a fish dish and a vegetarian/vegan dish once per week to make it all more interesting and healthier. Tradition in Kohola Surf Camps is that there is a dessert and a soup at least once a week. So I usually pair a vegetarian/vegan dish with a dessert, and a fish dish with a soup to make it look more fulfilling. Here is an example of a week menu:

I start the week with Saturday, which is the day when (mostly) old guests leave and new ones arrive. For that day lasagna is a great dish because it’s one of those foods that everybody likes, and it can be easily reheated if new guests arrive long after the time for dinner. Mexican (style) tortillas with chicken and beans is also a crowd-pleaser, plus everybody fills their own tortillas so people mingle around the table and talk to each other. Another tradition in Kohola Surf Camps is barbecue on Fridays. To prepare body for the heavy impact of delicious grilled food on people’s stomach, I make a fish dish on Thursday. For other days I choose a dish that is different than one from the day before, and I assess that difference on 3 factors: the source of protein (chicken, turkey, pork, beef, or fish) as the main factor, the source of carbohydrates (pasta, tortillas, rice, potatoes, or gnocchi), and the “eating style” (the way a dish is eaten). To explain eating style factor here are few examples: lasagna is just one piece, every bite is the same, then tortillas are put together personally and eaten with hands (mostly), a curry or a chilli con carne is a stew-like dish served with rice and eaten with a spoon, for risotto only a fork is needed, and roasted chicken and barbecue are eaten with a fork and a knife.

Of course, menu plans change and adapt during the week according to guests’ eating habits and likings, and offer in the supermarket where I buy food. Some people are allergic to some foods and some have specific diets, so I take that into account while planning the menu. Also, guests that are coming back to the camp have good memories of some dishes and have craving for those dishes. So even though I make a meal plan for a whole week, it is likely to change, which makes this whole thing a dynamic process.

That’s it for planning. Now it’s time for action! Or maybe not exactly now, but in the next post. C ya there 😉