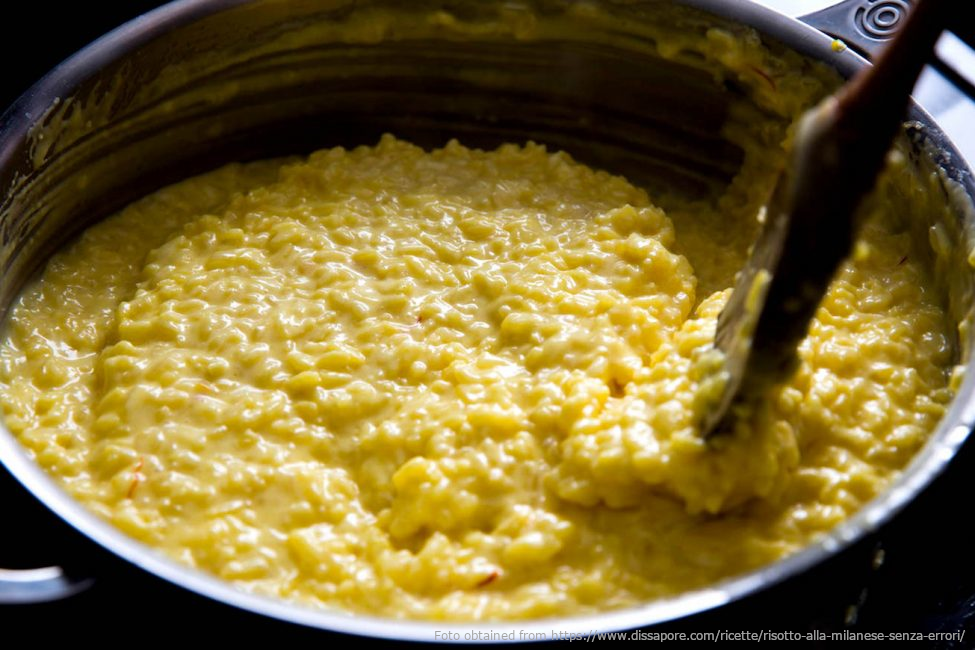 This is not a recipe. This is a series of facts, observations and explanations concerning one of the most famous Italian dishes (after pizza and pasta, of course), but in a short version, since there is so much to tell about it. Information from this post can be used for making any risotto (better) and understanding why is it made in such a way.
Firstly, the dish itself is introduced through its history, ingredients and general recipe (or better to say: cooking guidelines). Secondly, the most important part is explained, the rice. Which rice? Why to use that rice? After rice, the cooking liquid and the technique to cook the dish are explained. There are tricks and tips summarized for making risotto at the end.

According to Online Etymology Dictionary, risotto is rice cooked in broth with meat and cheese, 1848, from Italian risotto, from riso “rice”. At first in Italian contexts; it begins to appear in English cookery books c. 1880.

Rice has been grown in southern Italy since the 14th century, and eventually reached Milan, the capital of Lombardy region of Italy. According to a legend, a young glassblower’s apprentice from Flanders, who used to use saffron as a pigment, added it to a rice dish at a wedding feast in 1574. And the risotto was born. A long time has passed until the first risotto recipe that was written down in 1809. It includes rice sautéed in butter, sausages, bone marrow and onions, cooked in hot broth with saffron gradually added. There is a recipe for a dish named as risotto in the 1854 Trattato di cucina (‘Treatise on Cooking’) by Giovanni Vialardi, assistant chief chef to kings. However, the question of who invented the risotto in Milan remains unanswered today.

Risotto is normally a first course, served on its own before the main course. One exception to that is risotto alla milanese which is normally served together with ossobuco (cross-cut veal shanks braised with vegetables, white wine and broth). There are many different versions of risotto (59 according to Accademia Italiana della Cucina), depending on the ingredients and the region it comes from. Apart from rice and the broth it is cooked in, risottos can contain meat, fish, or vegetables.

The main component of the rice is starch (amylum), a polymeric carbohydrate consisting of a large number of glucose units joined by glycosidic bonds, which is basically a long chain of single sugar molecules linked together. There are two types of starch in rice: amylose, and amylopectin. The ratio between those two starch types is what determines the texture of the rice and the sauce. Rice used for risotto has higher proportion of amylopectin (insoluble in water) to amylose (soluble in water), which leads to a desirably thick sauce. All rice types for risotto are short- to medium-grain size.

Let’s talk about which varieties are used for risotto. One could go simple and just read the package. It might say “ideal for risotto, salads and other rice dishes”, but each rice is for a specific dish, there are no such universal rice varieties. Also, they can be “mother” or “daughter” varieties, where “daughter” varieties are cultivars of “mother” varieties. For example, Karnak variety is obtained from Carnaroli through a gene modification, so Karnak rice is also Carnaroli rice. This kind of classification makes it difficult to distinguish. But let’s not talk about that here, it is material for another post. Here are some of the popular choices of rice for risotto.

Attributes fino, semifino, superfino or similar refer to the size and shape (specifically the length and the narrowness) of the grains, and not the quality. There is nothing more to it.

After toasting the grains in some fat, the first liquid rice gets soaked in is wine, usually white. It stops the toasting process and starts to cook the rice, but it is not added because of that. It is added for the flavor.

The rice of risotto is normally cooked in a broth. The broth corresponds to the ingredients of the risotto. For example, if one makes risotto with fish, corresponding broth would be fish broth, or meat broth for risotto with meat. Although, vegetable broth could be used as a substitute for risotto with meat or fish. But the best bet would be using the broth stated in the recipe. The broth must be seasoned perfectly to taste because it is the only seasoning for the risotto, i.e. the broth is the only source of salt for the dish.

Now to the signature part of making risotto: a ladle of broth is added to the rice and stirred until rice soaks the liquid, then repeated until the broth has all been absorbed, the rice is plump, and the sauce is creamy. It is the most demanding part of making risotto, and might seem tedious, but years of tradition and experience showed that it is the best way to get creamy risotto. But why is that so?

The starch makes the mixture creamy. When the broth is added in small batches, the rice is kept in close contact. So when stirring it, more starch is let loose from the rice grains. Therefore, more stirring with just a bit of liquid results in more starch being rubbed off, which makes the risotto creamier. Starch is activated with heat, but also breaks down under too much heat, so risotto should be cooked carefully on a low to medium heat (it should never boil vigorously).

Traditionally, a pot with simmering broth is kept next to the pot with risotto, so the broth can be easily ladled into risotto. Keeping the broth on a simmer reduces the overall cooking time because pouring cold broth stops cooking of risotto until the mixture is heated again to a simmer. Ladling cold broth doesn’t change the texture of the final product, but it prolongs the cooking time. The author of the article argues that “There’s no need to heat up the broth in a separate pot while you make the risotto. Sure, it’ll shave a few minutes off the cook time of the actual rice, but you add that time back and more in the amount of time it takes to heat up a pot of stock, not to mention washing two pots instead of one.” But if that extra pot with broth is put to heat as the first thing in the whole risotto making operation, it will come to a simmer while other ingredients are prepared (onion diced, vegetables washed and cut…)

Now to the end of the cooking process. Risotto must be cooked al dente (as surely everybody knows), which means taking it off the heat a minute before it reaches that point. The pot should be covered and risotto left to rest for few minutes. Even though it is not on a heat, it is still being cooked by residual heat, the rice is still soaking the broth, and the starch is making the sauce thicker. After turning off the heat but before leaving it to rest, last ingredients are added to the mix to make risotto even creamier. Those ingredients could be butter, cream, mascarpone, parmesan, or a combination of some of those. This is also the point to add parsley if wanted.

Although risotto might seem as an easy dish to make, it takes time and practice to make it creamy and properly delicious. Understanding theory and science behind this dish makes the learning process faster, which is intent of this post. Some parts of making risotto that are not covered in this post are: using onion and garlic, toasting rice, using different wines, using spices, plating.
To finish this post, here are some tricks and tips found useful by the author: