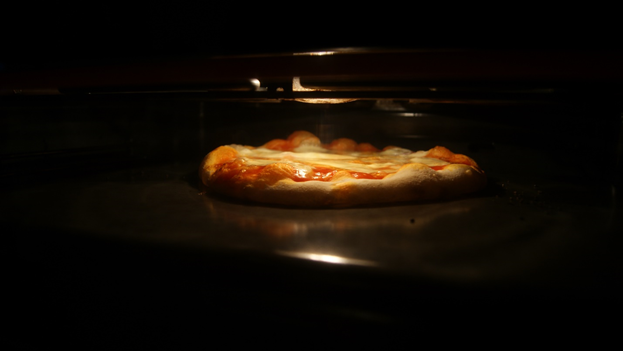 Homemade pizza dough is somewhat of a mini mystery – the main subject being the yeast amount needed for the perfect result. Often the results would be closer to bread then the fine, thin pizza with a rich and crunchy crust. So, what is the perfect recipe for the homemade pizza then? We have made an experiment with various yeast amounts and types to determine that.

The characteristics of the dough greatly rely on the amount of yeast used and on the time the dough spends resting before you bake it. More yeast, the dough rises quicker. More time spent rising (fermenting), the dough increases in volume. The trick is to find the perfect balance between the amount of the yeast and the fermentation time, which are, logically, inversely proportional. Same day fermentation often yields satisfactory results, but the real fun starts with multiple-day cold fermentation. It has been found that multiple-day cold fermentation (the retardation method) produces rich aromas and better structure of the dough so that’s what we want. At cool temperatures yeast behaves differently: produces carbon dioxide more slowly, produces fewer sour compounds and the gluten structure is improved because the enzymes from the flour have more time to work on the proteins.

We chose the Italian classic as our test subject – Pizza Napolitana. The dough recipe consists of only four ingredients: water, flour, salt and yeast, and is baked in a wood fire oven which has reached the cooking temperature of 485°C. Since flour is the main ingredient, it is important to use the right flour type. Staying true to the original Italian recipe we used “00” flour (very fine, powder-like white flour) with 12% protein content. Since we are cooking the pizza in our regular home oven at only 250°C, we’ll add two more ingredients which will the temperature of the dough a little bit: sugar and olive oil. All our recipes use the same ingredients, the same ratios, except for the yeast: it varies in type (dry or fresh) and (0,5%, 1,0%, 1,8%). We have measured ingredients by weight, not by volume.

In total, we have tested six different pizza dough variations:

Mix salt and water together, set aside. Mix yeast and flour, add sugar, oil and water/salt solution. Knead well, for at least 15-20 minutes to activate the protein (gluten). It’s what gives dough its structure; form a smooth dough, set it aside, covered, at room temperature to rest for half an hour to an hour.

After that time, separate the dough and form nice, even balls, each for one pizza. The amount of ingredients we used makes 364g of dough, that makes 2 small pizzas. Roughly, one pizza, 25-32 cm in diameter, would require between 180g and 250g of dough.

Put the pizza dough balls in an airtight container and let them rise in the fridge for 3 days. This process is known as cold fermentation or retardation. Keep checking on the dough, when it doubles in size, it is ready to be baked. So by varying the fermentation time and the amount you can aim at different timings, but bare in mind the slower the dough rises, the and complex it’ll taste. To a certain point, of course. Even at cold temperatures, the yeast will start producing a large of sour milk aromas, throwing off the of the dough. Three to five days of cold fermentation is the safest option.

After three days it was time to test the dough. The difference in the size of the specimens was quite visible. We have used simple toppings, the same for every pizza: tomato sauce, mozzarella, fresh basil, olive oil on the rim. Baking time was 4’30”.

Properties tested were dough elasticity (ability to stretch), fluffiness – dough texture/airiness when baked, the form of the rim, smell and flavour (taste, texture).

If the dough to an appropriate amount, it should stretch easily into a pizza. Take it out of the fridge and wait until it sets to room temperature. Stretch the dough gently, don’t it at all, to keep most of the air bubbles inside. Don’t use any tools, stretch it with your fingers and form the rim that is slightly thicker than the of the pizza.

One of the most important aspects of baked pizza dough is its fluffiness or, more technically, its texture. You want the dough to be airy and gentle on the inside and crunchy on the outside. If it’s stiff and chewy it hasn’t risen enough, or it has been rising too long so it collapsed and lost the air.

Regarding the dough it can be concluded that the fresh yeast versions were of satisfying structure, the proving as being the most palatable. The Dmin version can be put in the same category. However, the Dmid and Dmax have obviously been rising for too long – they have collapsed back resulting in a not so airy dough, especially the Dmax which was very dense, like a pie.

The form / thickness and the crunchiness of the rim means a lot to pizza lovers. While the center of the pizza should stay rather thin and compact, the rim should be well risen and crunchy.

as in the fluffiness department, the Fmin, Fmid and Dmin versions formed a nice, well risen, crunchy rim, while the other versions rose evenly throughout so no rim was formed and the pizza was simply too thick.

Last but not , we have evaluated the smell and the of the dough. The simple toppings let us taste the dough quite nicely so slight differences were easily spotted.

Based on the characteristics tested (dough elasticity, fluffiness, the rim, smell/flavor) our conclusion is that three days cold fermentation of the pizza dough works best with the smallest amount of fresh yeast (0,5%). More yeast would scientifically influence the taste, making it “yeasty” and with dry yeast even bitter in aftertaste. Furthermore, too much yeast results in a collapsed dough which has no pleasant characteristics at all. To improve the fluffiness of the baked dough the yeast amount can be slightly increased towards the Fmid value, cca +0,2%.

You can download this document in a pdf file here